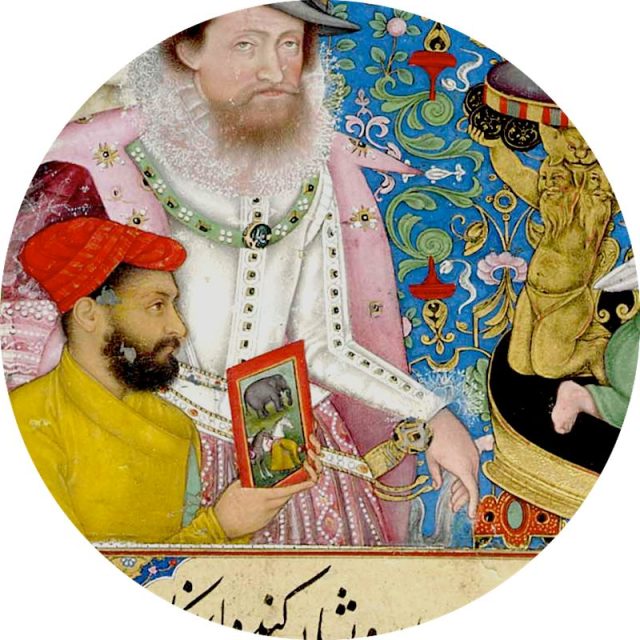 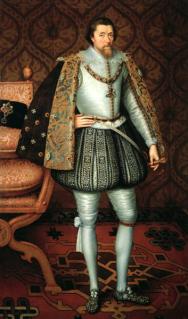 The above image is one of my favorite examples of the bizarre cross-pollinations that early modern globalization brought about. It is a detail from a lavish watercolor painting created in 1618 by Bichitr for the Mughal emperor Jahangir (1569-1627). Here we find the strange juxtaposition of James I and VI of England and Scotland (1566-1625) alongside a self-portrait of the artist, Bichitr, holding a small panel painting that depicts him bowing deeply while surrounded by an elephant and fine horses (probably animals from Jahangir’s royal menagerie). At left is an official royal portrait of King James that probably served as the basis for Bichitr’s more colorful depiction. I suspect that a copy of this painting was  presented to the Mughal ‘Peacock Throne’ by the 1615-1619 embassy of Sir Thomas Roe, one of the early English emissaries sent to establish trade relations in India, as an attempt to demonstrate the grandeur of the English state. The Mughals, however, were decidedly unimpressed. This is amply illustrated by Bichitr’s full painting (see below) which depicts Jahangir turning away from both James and the Shah of Persia in order to converse with a humble Sufi holy man.
What I find most interesting about this work, however, is the painting of animals that Bichitr is holding. Why are they there?

Another work, by the celebrated Mughal court painter Ustad Mansur, offers an even more intriguing depiction of an animal from Jahangir’s court. Jahangir recalled this creature in the official chronicle of his reign as an “extremely strange” wonder and an object of debate among his courtly savants, who were not able to guess its name or provenance:

As you may have guessed, this is none other than a common North American turkey! But what in the world is it doing in India, sitting for a formal portrait in the throne room of the Mughal emperor, one of the most powerful individuals on the planet? Here’s an extract from a paper I wrote that addresses this strange episode the turkey’s audience before the Peacock Throne:

To lock gazes with the turkey’s familiar visage as it peers out at us from the stylized pictorial space of a seventeenth-century Mughal watercolor is to confront a mystery. By what circuitous route did this “true original Native of America,” as Benjamin Franklin called it, come to arrive at the most glittering court of Asia? In fact, this encounter between American nature and Indian splendor was not as strange as it may at first seem. A keenly observant man with a fervent interest in natural history, Jahangir kept an extensive menagerie of exotic creatures and delighted in recording their behaviors in his journal. It was at Jahangir’s behest that the court painter Mansur, called the “Miracle of his Age” by contemporaries for the uncanny verisimilitude of his draftsmanship, produced a corpus of over one hundred natural history paintings that rival the work of any European contemporary.  Indeed, two years earlier Mansur had painted a minutely detailed likeness of a Mauritian dodo that is still cited by biologists as the most accurate surviving representation of the bird.  As the patron of a court culture that invested immense value in the procurement and documentation of natural curiosities, therefore, Jahangir was in some respects the author of his own wonderment.

By the beginning of Jahangir’s reign (1605-1627), Spanish, Portuguese, Dutch and English ocean-going vessels were plying the spoils of American nature throughout all the major emporia of the Old World, from Senegal to Japan. Although Jahangir regarded the Portuguese and their competitors as a negligible presence in his domain, he was well aware that the people he called ‘Franks’ had access to networks of exotic circulation that were closed off to his own subjects. Indeed, Jahangir’s sole reference to Goa in his self-authored chronicle of his reign, the Jahangirnama, was to note that his turkey had been obtained along with several other exotic beasts by a servant sent to the “vice-rei” at “the port of Goa… to purchase any rarities he could get hold of there for the royal treasury.”  To Jahangir, the Portuguese were mere couriers and purveyors of the natural ‘rarities’ that were the true object of his diplomacy. It was the American animal – and not the European merchant – that interested Jahangir and his court.

Jahangir was not the only Asian potentate to be fascinated by the exotic beasts carried by the Portuguese. I’ve written previously, for instance, about this fascinating Japanese nanban screen from the 16th century that depicts Portuguese creole traders selling animals from faraway lands in a Japanese market:

Jahangir’s turkey was, ultimately, a harbinger of great changes. It had been carried to Jahangir’s court in Agra by an underling Jahangir sent to purchase ‘rarities’ from the ‘Vice-Rei at Goa’ — in other words, the Portuguese. Although the Mughals were still secure in their power in this period, with Europeans serving as little more than petty traders in the periphery of their imperial demesne, times would change: by the reign of Jahangir’s grandson Aurgangzeb (1658-1707), the British, French and Dutch had made serious territorial gains and were beginning to dominate trade in the bustling emporia of the Indian Ocean, having rested control of this commerce from a diverse array of Hindu, Parsee, Muslim, Chinese, Malay, Armenian and Jewish merchant communities. The globalization of this period was often weak and attenuated, based on exotica likes gems, drugs and animals rather than everyday commodities (see the Wikipedia page on A.G. Hopkins’ and C.A. Bayly’s concept of ‘archaic globalization‘), but it had very real effects. The appearance of strange objects from unknown lands (from tobacco to turkeys) was often the first harbinger of the epochal changes that brought the New World of the Americas and the European trading empires into conflict with the vast territorial states of Asia. The balance of world power was shifting. And, in its own humble way, Jahangir’s turkey had something to do with it.
The history of animals is still a very new field, so I don’t believe much has been written specifically on exotic creatures and early European empires. Three exceptions I can think of are Samuel P. Wilson’s The Emperor’s Giraffe

(2006) is a very interesting and provocative study of the role of the more prosaic (but perhaps most important) domesticated animals in the service of British imperial expansion, probably the best of the lot and highly recommended. The art blog Silver and Exact offers a more in-depth analysis of Bichitr’s strange painting of Jahangir for those interested. Finally, the Smithsonian’s online Collection of South Asian and Himalayan Art is a great place to start for those interested in the brilliant tradition of Mughal watercolor painting (highly underrated by art historians and the general public, in my view – some of these paintings merit comparison with the greatest Renaissance artists).