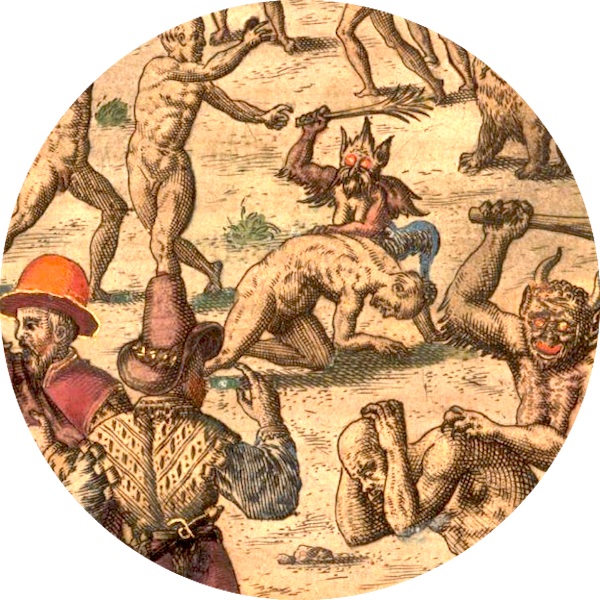 “I sat awhile, cringing upon my Hams among the Indians, after their Fashion, painted as they were, and all naked but only about the Waist, and with my Nose-piece… hanging over my mouth. … ‘Twas the better part of an Hour before one of the Crew, looking more narrowly upon me, cried out, Here’s our Doctor; and immediately they all congratulated my Arrival among them. I did what I could presently to wash off my Paint, but ’twas near a Month before I could get tolerably rid of it.” – Lionel Wafer on his ‘rescue’ by fellow buccaneers off the coast of Panama, 1681

The pirate-surgeon Lionel Wafer (1640-1705?) has won some modest attention from historians and those interested in pirate lore owing to his participation in the South Seas voyages of more famous buccaneers such as William Dampier and Bartholomew Sharp and his later role as an advisor to the disastrous Darién settlement scheme (I’ve also posted about him previously here). But the most interesting aspects of his story — which hinges on a period of four months during which Wafer lived with the Kuna people of Panama while recuperating from a leg wound — have gone without much notice. With that in mind, the remainder of this post is adapted from a conference paper on Wafer that I presented in Seattle last week. The theme is Wafer and his relation to science, demonology and indigenous spirituality. All images are from the Archive of Early American Images database of the John Carter Brown Library at Brown University, a wonderful online image resource.
When Lionel Wafer published his New Voyage and Description of the Isthmus of America, he was working as a surgeon in London, and he probably remained in England until his death. But if we go back to the fall of 1681, we find Wafer living not as an Englishman, but as a Kuna Indian of the Panamanian coast. In the four months he spent in the Darién, Wafer had been adopted into a Kuna community under the leadership of a king named Lacenta. He had seen a gruesome leg wound sustained during his travles cured by means of indigenous herbal knowledge. He had learned the Kuna language, traveled in a royal hunting party, and gained knowledge of local plants and medicines. He had used his surgical skills – specifically, his practice of phlebotomy, or blood-letting – to “save the life” of one of Lacenta’s wives.

And he had witnessed the work of shamans who had predicted the circumstances of his own return to the Christian world with uncanny accuracy. They had done so, Wafer claimed, by summoning the devil.

Wafer’s account of the devil in the New World was hardly new – on the contrary, Spanish and Portuguese chronicles of American conquest described indigenous Americans who wielded the power of Satan to make prognostications, place curses or effect cures. Yet Wafer’s account raised unsettling questions about the potentially supernatural (and Satanic) origin of traveler’s knowledge in a specific time and place – Britain in the Scientific Revolution – when such knowledge had never been more valuable, or more fraught with controversy. As David Livingstone

have shown, traveler’s accounts provided the first-hand reporting of phenomena that fueled the development of the natural sciences. But who was an acceptable source for this data?
By the close of the seventeenth century, what Anna Neil has called ‘buccaneer ethnographers’ such as Lionel Wafer’s travel partner William Dampier had demonstrated that even criminals and pirates could collect empirical data about the world’s ethnography and geography. Yet the personal histories of such individuals, who frequently resided among non-Christian indigenous peoples for extended periods, put them in the complex position of serving as mediators between the practices of scientific travel and indigenous spirituality.
Wafer stood squarely in between these two worlds. As Britain’s preeminent firsthand witness of the Panama region, he was a key figure in early attempts to understand the American tropics — and in efforts to make use of its resources. Indeed, in July of 1687 Wafer had been interviewed regarding the Darién’s colonization potential by none other than John Locke. Wafer’s account had also been printed and bound together with an account of Darien written by an unspecified “member of the Royal Society,” suggesting close links between Wafer and that institution.

How did this new generation of hybrid, cosmopolitan traveler navigate the boundaries between the scientific and the supernatural — and what can these negotiations tell us about the transformations of both the natural sciences and the British Empire at the dawn of the eighteenth century?

Wafer’s connection to the geographic and cultural space of the American tropics put him in a unique position to complicate understandings of Satan, science and the supernatural. He served as a courier of knowledge about a tropical world

that was still largely unknown to European science. But Wafer’s time in this space had bestowed on him a form of indigeneity that, while offering insights into the workings of nature in the New World, perhaps also rendered his testimony unreliable and epistemologically suspect. Wafer’s adoption of Kuna dress and ceremonial body paint, in particular, raised concerns about his trustworthiness that were tied to larger debates about the role of the devil in both European and non-European societies. John Bulwer’s 1656 frontispiece to Anthropometamorphosis, or the Artificial Changeling, for instance, shows a European woman, a hair-covered man and a South American Indian with full body paint standing side by side. They are being judged by Nature, Adam and Eve and a body of disapproving magistrates (including the ghost of Galen) for transforming their bodies, while the devil flies above them laughing and saying, “In the image of God created he them! But I have new-molded them to my likeness.” 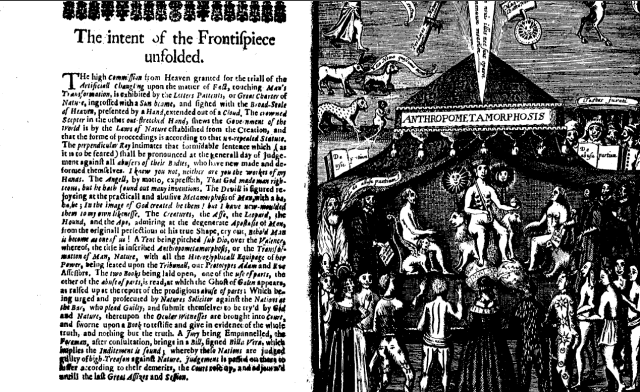 Wafer had written that his Kuna body paint eventually rubbed off, often with the “peeling away of flesh and all,” to reveal a European underneath– but did his time in the world of the Kuna leave traces of the indigenous that took longer to disappear? In the preface to the second edition to the New Voyage and Description, printed in 1694, Wafer attempted to reaffirm his status as a credible Christian observer, writing that he wished to “vindicat[e] my self to the World” regarding his previous account of “the Indian way of Conjuring,” which, he explained vaguely, had “very much startled… several of the most eminent Men of the Nation.” In this preface Wafer continued to maintain that the Kuna shamans practiced Satanism, and he buttressed his authority by citing parallel accounts produced by Scottish settlers in the Darién. He pointedly refrained, however, from defending his earlier claims about the accurate predictions this method produced.
As the geographer David N. Livingstone notes in his book Putting Science in its Place

, “To ask what role specific locations have in the making of scientific knowledge and to try to figure out how local experience is transformed into shared generalization is, I believe, to ask fundamentally geographical questions.” Wafer’s account affirms the truth of this claim. Yet it also opens up new questions about the entwined geographies of scientific and supernatural knowledge– for religion is, after all, the other pre-eminent tool by which “local experience is transformed into shared generalization.” Would Wafer have requested and affirmed the truth of “Satanic conjurations” if he were in Europe and not Panama? Or did these powers exist in relation to the spaces that harbored them, and did long-distance travel and the exigencies of print and place transform perception of them in some fundamental way? Wafer’s account leaves the question open.

You can read Wafer’s New Voyage and Description free of charge on Google books here. Ignacio Gallup-Diaz’s The Door to the Sea and the Key to the Universe: Indian Politics and Imperial Rivalry in the Darién, 1640-1750

is the best account of the region’s colonial history that I have found – it comes highly recommended, and is available free as a Gutenberg e-book via Columbia University Press. The University of Ohio library has a great blog post on its copy of Bulwer’s Anthropometamorphosis with accompanying scans here. Finally, for those interested in the larger questions surrounding exploration, indigenous-European interaction and science, I highly recommend William Hasty’s recent essay “Piracy and the Production of Knowledge in the Travels of William Dampier” and the works of Schaffer, Livingstone, Cook and Safier, which are hyperlinked above.