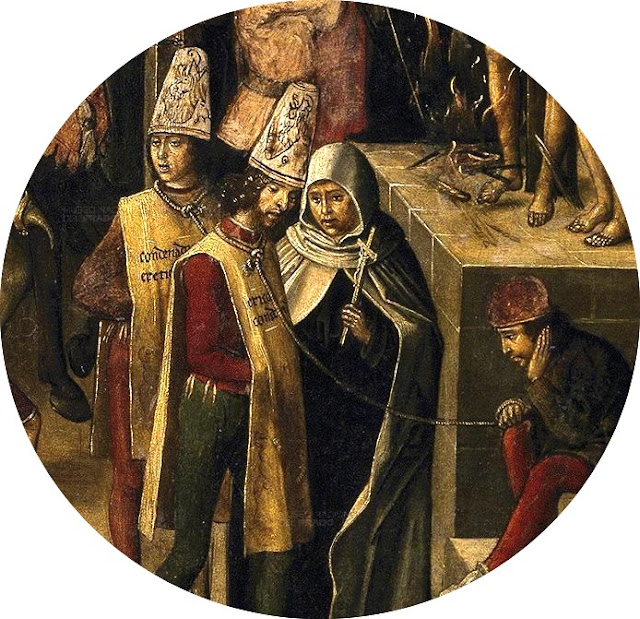 After the earthquake had destroyed three-fourths of Lisbon, the sages of that country could think of no means more effectual to prevent utter ruin than to give the people a beautiful auto-da-fé; for it had been decided by the University of Coimbra, that the burning of a few people alive by a slow fire, and with great ceremony, is an infallible secret to hinder the earth from quaking…
Eight days after they were dressed in san-benitos and their heads ornamented with paper mitres. The mitre and san-benito belonging to Candide were painted with reversed flames and with devils that had neither tails nor claws; but Pangloss’s devils had claws and tails and the flames were upright. They marched in procession thus habited and heard a very pathetic sermon, followed by fine church music. Candide was whipped in cadence while they were singing; the Biscayner, and the two men who had refused to eat bacon, were burnt; and Pangloss was hanged, though that was not the custom.
–Voltaire, Candide, Chapter Six.

The Portuguese auto da fé (or auto de fe in Spanish) was not meant strictly as a punishment – it was an “act of faith” intended to atone for the imagined sins of those prosecuted in the courts of the Inquisition via a series of religious rituals. This included a public procession, prayers, a formal reading of the legal charges leveled against the accused, and various forms of ‘atonement’ ranging from a mere public shaming to banishment or death. As the detail above shows, Voltaire’s description, though bitterly sardonic in intent, was pretty accurate in its visual details: the penitents here are shown wearing the same tunic-like garments known as san benitos and pointed paper ‘mitres’ as Voltaire’s hero Candide.

What is remarkable about this is that Voltaire wrote Candide in 1759, and the painting above is from circa 1495! The remarkable longevity of the Inquisition may, I think, have something to do with the public and ritualized nature of these rites. One reoccurring feature of the early modern world, after all, is that everyone — from children to the aged, peasants to lords — seemed to adore watching the brutal punishment of sinners and criminals. (The continuity and apparent universality of this popular affection for public execution is just one of the many unappetizing insights into human nature afforded by the study of history).

The full painting from which I’ve picked out the detail above is by the Spanish painter and sculptor Pedro Berruguete (1450-1504). I had never heard of him until I came across this work on Wikipedia, but I’m quite taken by the mixture of brilliantly observed pictorial detail (the shadows are particularly beautiful) and sensitive psychological insight on display here. The complete painting is below (click to see the original image size), along with a few more details that struck me.

There is a huge literature on the Iberian Inquisitions which I am far from an expert in, but I can heartily recommend Henry Kamen’s The Spanish Inquisition: A Historical Revision

(1999) for those seeking a fresh approach to the subject. This book was one of the more mind-bending revisions I encountered as an undergraduate new to early modern history — in essence, Kamen argues that the prosecutors of the Iberian Inquisition were actually in some respects more humane, skeptical and sensitive to the plight of the accused than the secular courts of the era. It is an interesting argument (which I’m sure I have butchered here with my half-remembered recollections) that Kamen backs up with a vast amount of archival evidence.