“Come, ye philosophers, who cry, ‘All’s well,’
And contemplate this ruin of a world.
Behold these shreds and cinders of your race…
…Did fallen Lisbon deeper drink of vice
Than London, Paris, or sunlit Madrid?”
– Voltaire, On the Lisbon Disaster (1755)

The Great Lisbon Earthquake and Tsunami of 1755 sent reverberations throughout European society. Leveling around 85% of the city’s infastructure, it essentially destroyed the medieval and Renaissance architecture of one of Europe’s greatest capitols and claimed up to 30,000 lives. The great French philosophe Voltaire not only wrote a mournful poem on the subject, of which an extract is quoted above — he also took the tragedy as inspiration for his darkly comic masterpiece Candide (1759), a picaresque fable that mocks the notion, championed by Leibniz among others, that we disaster-plagued mortals inhabit ‘the best of all possible worlds.’

I love early modern urban spaces and study 17th century Portuguese history, so I regret the fact that the Lisbon earthquake occurred on an almost weekly basis — so many ancient buildings, forgotten paintings, and priceless manuscripts consumed by fire and the Atlantic. So I was very happy to find these snippets of Lisbon’s urban life from the atlas Civitatis Orbis Terrarum, “The Cities of the World” (ed. Georg Braun, Cologne: 1572-1617), which show a bustling urban center of late-medieval type that bears little resemblance to the post-Pombaline Lisbon of today.

This detail centers on Ribeira Palace, the ancient Royal seat of the Portuguese monarchs destroyed in the earthquake (the long building with tower running perpendicular to the river). This building played a key role in Portuguese and, indeed, global history, since it was the meeting place of the Casa da Índia: the organization that directed Portuguese trade and empire in the Indian Ocean during the Iberian golden age of the sixteenth century. In a very real sense, this building was one of the hubs of the early modern global economy. Fittingly, a shipyard and a pillory for punishing criminals can be spotted adjoining it.

Here a group of the merchants who sustained Lisbon’s power can be seen paddling to port from their ship, docked in the River Tagus. 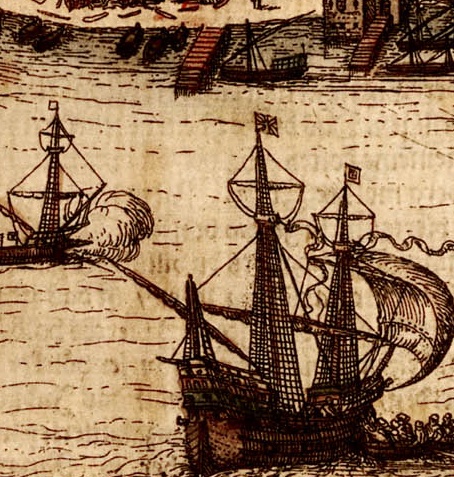 And here’s one of the wide-bodied trading vessels that routinely made the hazardous, month’s-long voyage to Portugal’s colonies and feitorias (trading posts) in Brazil, Africa’s slave coast and India.

The full map (click for a much more detailed version):

Georg Bauer and Hogenberg (engraver), Civitates Orbis Terrarum, Vol. 5 (Cologne: 1598). An accompanying Latin note calls Lisbon “the most noted center of trade for the entire Orient… and for Africa and America,” adding “in historical times there where two cities we might call ‘Ruler of the oceans and the high seas,’ from whence ships could set sail for the East and the West: one is Seville, the other Lisbon.”

For those interested in learning more, Michael Swift’s Cities of the Renaissance World

is a nicely illustrated volume that looks at more of the remarkably detailed urban maps from the Civitates Orbis Terrarum. There’s also a book on the Lisbon earthquake that’s just come out called Wrath of God

, but I have yet to read it. Finally, Voltaire’s Candide is one of my favorite short books. Read it for free online here.