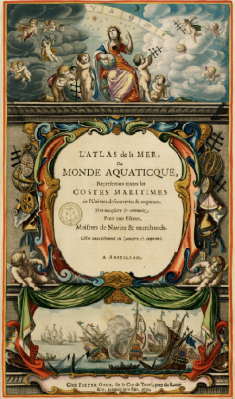 The images below are hand-colored details from two lavishly illustrated atlases of the world’s oceans produced by the workshops of Pieter Goos (d. 1670) and Johannes van Keulen (1654-1715).  Goos’ L’Atlas de la Mer, ou Monde Aquaticque (“Atlas of the Sea, or the Watery World”) the title page of which is visible at left, was published in Amsterdam in 1670. It would appear that van Keulen capitalized on the success of this work by reprinting the maps of Goos in slightly revised versions after his death in his Grand Nouvel Atlas de la Mer, ou Monde Aquatique (Amsterdam, 1696). Both Goos and Van Keulen shrewdly commercialized their knowledge of important commercial shipping lanes (which had once been proprietary to the Dutch trading companies) by publishing marine atlases in multiple languages, contributing to the hybridizations of knowledge and peoples that were a defining feature of the cosmopolitan late seventeenth-century.

What I find most interesting about these maps are the decorative, scroll-like ‘cartouches’ that ornament their corners, displaying a remarkable wealth of ethnographic and natural detail. These details, of course, were frequently wildly inaccurate, being based on second-hand information and long-held iconographies of the exotic and foreign (parasols, for instance, had a complex history in European depictions of Asians and Africans). Yet even these misperceptions are of interest, since, like the bizarre fabricated ethnographic sketches of Taiwan produced by the impostor George Psalmanazar, they offer insights into a vanished mental universe in which the boundaries of the known world were still shifting, uncertain and hazy, and when maps still contained huge swathes of blank space filled only by sea monsters and speculation.

All images are screenshots from hi-def scans of the works of Van Keullen and Goos that are accessible via a new online archive created by the French government relating to the Compagnie des Indes.

Several excellent recent works of history have also considered the political, economic and scientific implications of seventeenth-century world maps, and the larger world of cosmopolitanism, travel and early modern globalization in which they were embedded. I would especially recommend Alison Games’Web of Empire: English Cosmopolitans in an Age of Expansion

(Cambridge, 2001) and Harold Cook’s Matters of Exchange: Commerce, Medicine and Science in the Dutch Golden Age