The frontispiece (see below) to the witch hunter Mathew Hopkins‘ infamous pamphlet The Discovery of Witches (London, 1647) is a classic image, and rightly so: few texts better evoke the strangeness of the early modern witch hunt. I suppose the author, publisher and artist expected their early modern readership to feel a chill when they gazed upon this crude woodcut depicting the moon-eyed familiars of a coven of witches that Hopkins claimed to have discovered in Essex, but to my modern eyes these little creatures are strangely endearing. I’m especially fond of little Newes (see lower left corner), who, Hopkins noted briskly, was “like a Polcat.” 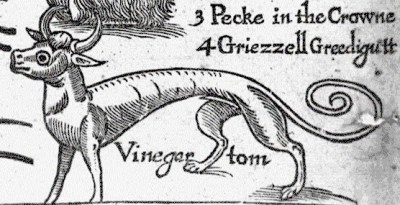 Here’s Hopkins’ explanation from The Discovery of Witches itself, which is available online for free as a Guttenberg E-Book:

The Discoverer [Hopkins] never travelled far for it, but in March 1644 he had some seven or eight of that horrible sect of Witches living in the Towne where he lived… who every six weeks in the night (being alwayes on the Friday night) had their meeting close by his house and had their severall solemne sacrifices there offered to the Devill, one of which this discoverer heard speaking to her Imps one night, and bid them goe to another Witch, who was thereupon apprehended, and searched, by women who had for many yeares knowne the Devills marks, and found to have three teats about her, which honest women have not: so upon command from the Justice they were to keep her from sleep two or three nights, expecting in that time to see her familiars, which the fourth night she called in by their severall names, and told them what shapes, a quarter of an houre before they came in, there being ten of us in the roome, the first she called was
1. Holt, who came in like a white kitling.
2. Jarmara, who came in like a fat Spaniel without any legs at all, she said she kept him fat, for she clapt her hand on her belly and said he suckt good blood from her body.
3. Vinegar Tom, who was like a long-legg’d Greyhound, with an head like an Oxe, with a long taile and broad eyes, who when this discoverer spoke to, and bade him goe to the place provided for him and his Angels, immediately transformed himselfe into the shape of a child of foure yeeres old without a head, and gave halfe a dozen turnes about the house, and vanished at the doore.
4. Sack and Sugar, like a black Rabbet.
5. Newes, like a Polcat. All these vanished away in a little time. Immediately after this Witch confessed severall other Witches, from whom she had her Imps, and named to divers women where their marks were, the number of their Marks, and Imps, and Imps names, as Elemanzer, Pyewacket, Peckin the Crown, Grizzel, Greedigut, &c. which no mortall could invent; and upon their searches the same Markes were found, the same number, and in the same place, and the like confessions from them of the same Imps…

Female witches were not the only ones who kept pets with supernatural powers — in the very same year that Hopkins made his supposed discovery, a bizarre pamphlet was published attributing magical powers to Boy, the famous war poodle of the Royalist Cavalier Prince Rupert of the Rhine. The crowded title page notes that the fearsome canine was only felled thanks to the counter-acting magical powers of a “Valiant Souldier, who had skill in Necromancy”:

Observant readers will also note the final title line, in which it is revealed that Boy — “the strange breed of this Shagg’d Cavalier” — was in fact “whelp’d of a Malignant Water-Witch.”  It was said that Boy could catch bullets in his mouth, find hidden treasure and foretell the future, and his powers were so respected by his fellow Royalist soldiers that the dog was promoted to the rank of Sergeant-Major-General!

is a good introduction to the subject of early modern witchcraft as a whole. For more on the specific topic of familiars see this essay by James A. Serpell. Stuart Clark’s Thinking with Demons

brilliantly elucidates the ideologies behind the witch craze. More works by Hans Baldung, the Dürer pupil who produced some of the most vivid and strange contemporary European depictions of sorcery, can be seen here.