Skip to content
John Jacob Berlu’s wonderfully titled The Treasury of Drugs Unlock’d (London, 1690) is a rare book, and I can find very little information on either the work itself or the author, who was apparently a London merchant of drugs, spices and other exotic commodities. I took the opportunity to look at the copy in the British Library and found the following. 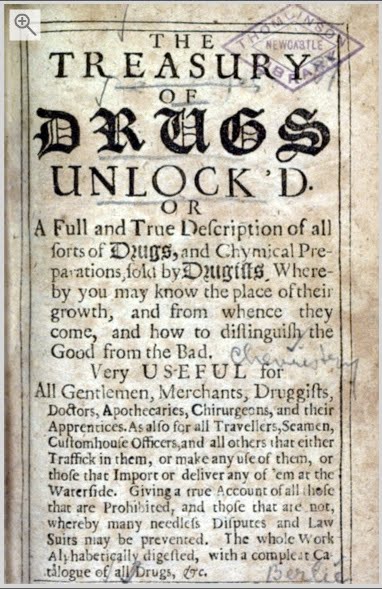 Title page of the first edition.

The book is essentially an encyclopedia or almanac of medicinal drugs, with around two hundred entries arranged in alphabetical order. Its important to remember that Berlu’s concept of what the word ‘drug’ meant and our own differ considerably — merely witness the fact that pine nuts, pistachios, “white sugar candy” and iron shavings, among others, are included in Berlu’s list of drugs used by physicians and apothecaries alongside familiar names like cannabis, opium and coffee.

Extracted here are a few of the more engaging entries. I’m especially fascinated/appalled by the three entries on the trade in edible human remains!

Ambra Grisea… it is of a most fragrant, pleasant smell, clear from any dross… running a hot Needle slightly into it, there will issue out a Fatness of a fragrant scent; ‘tis brought from the East and West Indies (viz. Bermoodos, &c.) and sometimes tis found in near parts adjacent… (6)

Adeps Hominis. The Fat of Man is gathered from those parts of Men, as Suet is made of other Creatures, and Hogs Lard from Hogs, of which the sweetest and cleanest is to be preferred. (2).

Bang. Is an Herb which comes from Bantam in the East Indies, of an Infatuating quality and pernicious use (18).

Cranium Humanum. The Scull of a Man ought to be of such an one which dieth a violent Death, (as War, or criminal Execution) and never buried: Therefore, those of Ireland are here best esteemed, being very clean and white, and often covered over with Moss (35).

Mumia. The Arabian Mumia, is a Liquor sweating out of dead Bodies, being Imbalmed with Aloes, Myrrh and Balsom, &c. wrapped up in Cere-cloths: Sometimes whole Bodies may be seen, with Hands, Legs and Toes, perfectly intire, being of a black colour: And that Mumia which is most gummy or bituminous, is best esteemed. ‘Tis brought from Chio and Egypt (83).

Pretty macabre stuff! As an aside, I love the fact that Berlu advises his reader to seek out skulls of “one which dieth a violent Death” in Ireland.

But Berlu had a good cause in mind when advising his readers where to find oily mummies, moss covered skulls, cannabis and “Fat of Man,” among other desirable goods. I sign off today’s post with a quote from his prologue, which contains some interesting hints of the travails of a drug merchant in seventeenth century London:

Courteous and Benevolent READER. Certainly nothing can promote Trade more than for Men to learn and understand those Commodities and Merchandizes; they do intend to Trade in; which gives me hopes that this Treatise will be kindly accepted of, and that those of the Trade of Druggist will be more Ingenuous than that Popish Tenet, to keep the People in Ignorance. The Price Currant which is weekly published of Drugs, may prejudice, this cannot: For the more Men understand the goodness of a Commodity, the more value they will set upon it.
To avoid also those dangers (of prohibited Goods) by which I have been (as it were) shipwracked, you will easily discern the places of growth, being mentioned almost to every Commodity, and thereby avoid those Rocks and Perils by which I have fore-gone a good estale. Vale.